stopping by woods on a rainy evening

I enjoyed another wonderful retreat at Tallgrass Spiritual Retreat Center in the Flint Hills last weekend.  If you haven't yet visited this place, I highly recommend you do so before Billie leaves this summer!  The countryside is gorgeous: 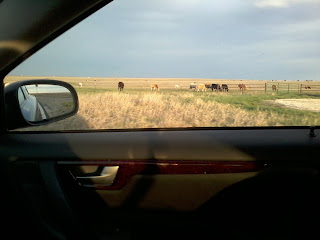 Okay, you have to like lots of sky and cows and fields.  And yes, this is the Flint Hills.  I just can't take pictures and drive at the same time on the windy, hilly parts, but they honestly are beautiful. 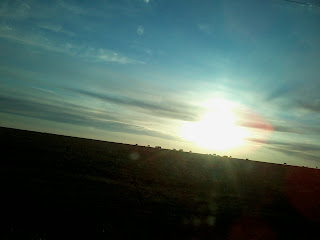 Technically, this isn't a hill; I was just holding my camera crooked.  Those are cows on the horizon, not ants.

Anyway, I learned a bit of SoulCollage.  I'll just let you explore their website.  It may seem voodooey or New Agey to some of my readers, and it can be used that way, but it doesn't have to be.  I appreciated reflecting on various aspects of my personality, or my inner selves, and learning from and about them.  For example: 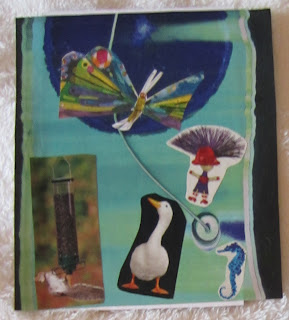 This card represents my goofy side.  Obviously  I'm going to have to make more cards to adequately express this part of myself. 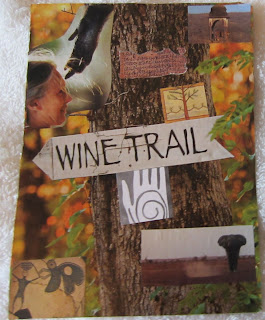 This represents what I call my shaman.  By "shaman" I don't mean one who uses magic, but simply one who hopes she is used by God to facilitate others' communion with him.   I broke a rule there with the sign's words - it's supposed to be pictures only - but "wine" made me think of "whine" which made me laugh and of the blood of Christ.  I realize in the top left that it looks like I think God is an ape.  What I mean to communicate with that photo is the connection humans have with animals and all of creation. 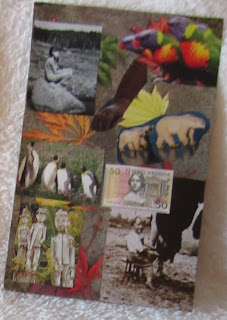 This one represents me as a member of a large family.  I saw the pic of the boy with the cow first, and it reminded me of Grandpa and Dad.  Then I saw the photo in the upper left and was reminded of my mom.  I grumbled to myself that I hadn't meant to bring my family with me on this retreat, but when I saw the rainbow-colored parrots, I gave up.  It reminded me of a cousin who loves rainbows, then all my cousins.  So here you have a portrayal of various and all family members.  (Dang it.  I just remembered there was a small picture of a turkey in the stack of pictures.  I could have used it for my brother.  Oh well, live and learn.) 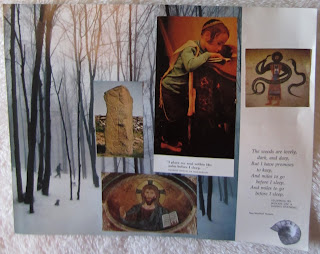 This one started out as a portrayal of the dark, or, in Jungian terms, the shadow side of me.  I started with the picture of the forest and the words (oops) from his poem "Stopping by Woods on a Snowy Evening."  I added the snakes, then I found the picture of the Jewish boy with wording (oops oops) similar to Frost's, so I put that on there, then I put on the other pics and decided this represents a combination of my shadow self and the part of myself that is interested in learning about other religions.  The dark schizophrenic, if you will.

My stay was short and squeezed in between two sessions of working with kids.  I thought I was being an idiot; I usually can't handle a schedule that loaded, but of course I was instead refreshed and renewed by the time and by Billie's hospitality.  Thank you again, Billie, for the physical and spiritual space and the teaching that you give! 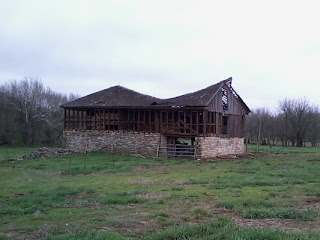 Posted by Kerri at 11:36 AM No comments: Links to this post 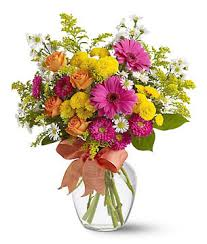 I took a bouquet of flowers to work today and gave everybody one, wishing them a happy May Day.  It was almost as fun as when I was 4 or 5 and left the flowers, knocked on the door, then ran away, but not quite.  I'm going to have to add that step back next year.

Posted by Kerri at 10:20 PM No comments: Links to this post

I like a lot of what Ignatian Spirituality has to say.  This morning, the computer tech guy at work was helping me with a problem.  When I logged on, a blank, black window popped up.  He's been trying to get that to go away for several days.  I told him not to bother, because I used it as a reminder to slow down, stay aware, and not get bogged down in my work.  I actually enjoy seeing that window now.
Posted by Kerri at 5:29 PM No comments: Links to this post

The other day I took my group boys (ages 6-8) to a play place at a fast-food restaurant; these places are their favorite places to go. 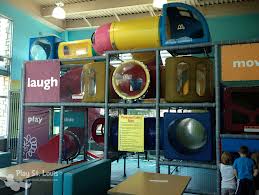 Unfortunately, whether due to spring or the fact that they were tired from an extra group session the day before or who knows what, they were very hyper and could only follow my directions for a few seconds before they broke our group rules for the use of that space.  After several minutes and numerous prompts, I told the boys that I would have to take them somewhere else because they were not respecting the rules, the site, and the other children playing.  "Let's go to a park!" one boy said.  My first thought was, "There's no way I'm taking you to a park right now; it will seem like a reward for your bad behavior."

Fortunately, I reflected on my decision.  The boys were not acting hyper or breaking the rules in order to be defiant; they simply were too wound up for an enclosed space.  At a park, they could run and yell and, hopefully, use up some energy. 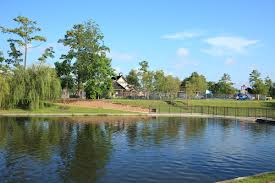 So we went to the park.  The boys asked if they could visit the lake first and throw stones in it as they had done before.  I said yes, just don't go IN the lake.  I prepared myself for wet boys, or, at the very least, sopping wet shoes.  But they followed my direction.  They worked with each other to lift and throw the biggest rocks they could find to make ever-bigger splashes.  As I learned in my special education training, heavy work is a great way to help excited kids calm down.  When I said it was time to go to the playground area, the boys ran the 50+ yards to the equipment, joined a few other kids in their games, and played their hearts out.  They were fine.  When I said it was time to go home, they ran to the car.
I was reminded of something God taught me with these boys a few weeks earlier.  I'd taken them to a labyrinth at a local convent.  I thought the boys would enjoy walking the winding path. 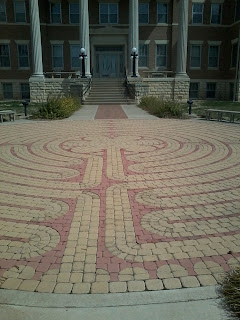 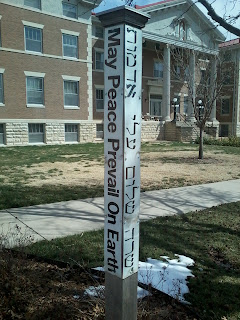 But the boys did not want to walk the path, they wanted to run it and race each other to the center and out again.  At first I tried to stop them and make them walk without racing.  Then I sensed God's response:  "They're 6-year-old boys, not octogenarian nuns.  Let them experience the path in their own way."  I feared at least one of those nuns would come out and yell at us to stop, but that fear was as unfounded as my fear of having to deal with sopping wet boys.
We had a bit of extra time when we left the park the other day, and one of the boys asked if we could go to "that place that winds around and around and you have to stay on the path and not step in the hot lava (outside the path)."  Once I figured out what he meant, we went.  As we were approaching the site, the boy called out excitedly, "I see it!  There it is!"  This time I gave the boys no directions and watched to see what they would do.  I was amazed.  The boys ran, but they ran silently, without speaking or racing.  For several minutes all I heard was the thump, thump, thump of their shoes hitting the bricks.  Their approach to the labyrinth had changed, without me ever telling them that I use it as a time for reflection and communion with God.
When we let others be who they are, rather than who we want to mold them to be, true life bursts forth and wonderful things can happen.  I am so thankful God shut me up that day.
﻿
Posted by Kerri at 12:03 AM No comments: Links to this post 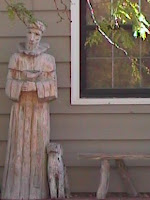